April 10, 2014
The Health System Research Directorate (HSRD) of the Ethiopian Health and Nutrition Research Institute (EHNRI) released that following the vaccination campaign the Post Measles Supplemental Immunization Activities (SIA) survey is launched on June 20, 2013 at the National level.
Prior to this survey, the Ethiopian Ministry of Health in close collaboration with all Regional Health Bureaus has conducted the Measles Supplemental vaccination that covers all under five years children across the country from May 29 to June 2, 2013.
According to 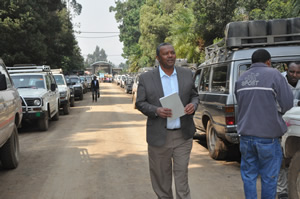 , following the campaign the post measles supplemental immunization activities (SIA) coverage survey is planned to be conducted for the duration of three weeks. This survey aims to determine the measles coverage, validate the administrative coverage in accordance with Global Alliance for Vaccine and Immunization (GAVI) application for Measles support, and identify areas for improvement.
‘’As it is a nationwide effort towards the prevention and control of measles, I call all the concerned bodies including households that are covered in the survey to collaborate in the process of the data collection’’ said Ato Abebe.
The survey is planned to be conducted in 96 administrative zones and in each zone 15 clusters are selected randomly in collaboration with Central Statistics Agency (CSA).
In the selected clusters, data will be collected through household survey from 10 children between 9 to 59 months of age and overall, 150 children will be evaluated in each zone with the sum total of 14,400 children across the country.
The survey that receives a budget of above nine million ETB is stretched from May to September 2013. Following the recent data collection that encompasses 190 data collectors and 24 Supervisors, the data entry, cleaning and analysis will take place from July to August, 2013. It is also planned to deliver the presentation of the preliminary result at the end of October, 2013 and final report will be submitted to FMoH in December 2013 after the integration of all the given comments.
Ethiopia has adapted the measles elimination targets that is aimed to achieve at least 90% measles vaccination coverage nationally and at least 80% in every woreda by 2020.