The Ethiopian Health and Nutrition Research Institute, EHNRI in collaboration with World Health Organization, WHO Ethiopia Office host an international forum on Evidence-informed health policy in low and middle income countries held at the United Nations Conference Center in Addis Ababa from 28 to 30 August, 2012. 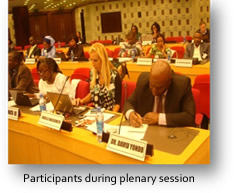 According to the Forum’s organizers, the meeting was conducted to share and further develop resources that support Evidence-Informed Health Policymaking (EIHP) and build capacity for EIHP in low and middle-income countries. It was also aiming at providing an opportunity for networking among initiatives to support EIHP and promote EIHP in low and middle-income countries.

The Forum, that provided plenary presentations and discussions with a focus on parallel and smaller group sessions for participants, brought together over 100 participants drawn from various countries that include researchers, policy makers, development organizations, donors, practitioners, and journalists.

Participants of the Forum said that, over the three days, they have obtained an understanding of EVIPNet and EIHP initiatives and exchanged valuable experiences and learned lessons from other countries.

Prior to the Forum, a one day pre-forum workshop was also held on 27 August 2012 mainly for journalists and representatives of Civil Society Organizations that aimed at exploring ways for better engaging the media to work together on evidence informed health policy making. In addition to that, a one day meeting of SURE partners was convened on 31 August 2012 to discuss on achievements, challenges and the way forward of SURE project activities.

The forum was organized by Supporting the Use of Research Evidence in African Health Systems (SURE), a Research Consortium funded by the European Commission’s 7th Framework Program together with the WHO Evidence-Informed Policy Network (EVIPNet) and the Regional East African Community Health (REACH) Policy Initiative.

The Technology Transfer & Research Translation Directorate of EHNRI, which is also part of the Forum Organizing team, In line with advocating the formulation and/or amendments of sound policies in the health sector supported by scientific evidence, has produced policy briefs, tested user policy briefs and intended to establish a clearinghouse that would serve as online repository of policy briefs for informed decision making on health policy of Ethiopia.